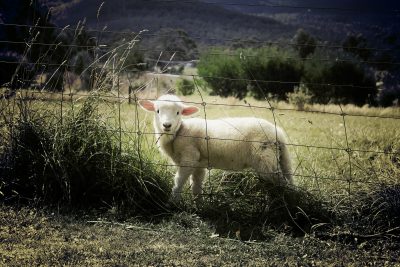 “Boundaries define us. They define what is me and what is not me. A boundary shows me where I end and someone else begins, leading me into a sense of ownership.” Dr Henry Cloud

This is one of three blogs that I have written over the past few weeks on the subject of boundaries.

Recently I was on a cattle property with my husband and boys. I took the time to walk from where we were camped to the back of the property, a distance of about 2 kilometres. At one stage I was walking up a steep section of the property, when I stopped to catch my breath. I looked across at the fence and something caught my attention. A fence and a gate. Now, ask yourself, why would that catch my attention? Because I was looking at a boundary fence..

There it was, out in the middle of the bush with no roads going through it, an unlocked gate. No locks. Just a simple galvanised steel gate with a chain holding it the gate post.

It disturbed me that it was there. I didn’t like it, but I didn’t understand why it upset me. I soon forgot this scenario as I walked home.

Over the past few week, I have had the picture come back to my mind strongly and I sensed that God wanted to say something about it. I have the sense of unsettling and the unlocked gate has been sitting heavily in my heart for the past few weeks. So the question came- Why God? Why does it unsettle me?

For the past 2 years I have been aware of a number of laws that have been brought into our country, that is not only changing boundary lines and fences (the definitions of the boundary lines and whether there should be fences in the first place), and changing what people can do within their own land (what you actually consider as yours and how much is now yours).

There are people who are genuinely concerned that the new laws put in place will ultimately change their land and the rights that come with having land. To put it more bluntly – The right to choose what you believe and how you live within the boundaries of sense, decency and the law.

The government is moving more and more into matters of religion, marriage and children. They are now saying not only that your children will live a certain way, but you will not teach your children to live and believe the same way you do.

To me, it seems as simplistic as this; I have sheep on my land, now the government through force is going to tell me to only have goats. Not only that, but if I have sheep, they will either remove my sheep from me or call them goats anyway. The fact that I chose by my freedom of choice (to have sheep) seems to slowly being buried under a mountain of laws and removal of rights.

It is also simplistic as this; I want boundary fences so I know what is under my protection and care. But there are others that want the fences pulled down and new fences erected according to the terms of their beliefs…. even if now the fences are moveable to the rights and demands of a minority.

“Bigot” they cry, “how dare you demand the rights to bring up your child with a faith in your imaginary god.”

“Because I gave birth to them, I feed them and clothe them. I love them and know them, and have their best interests at heart. It is my house, my yard, my land… and they live there. I am not harming them, hurting or abusing them. When they are 18 years old they can choose for themselves and choose their own beliefs.”

“Ahhh,” they cry, “they will not be yours for too much longer. The laws will change and you will only be their guardians soon. So, if you don’t do as we say, we will make it abuse simply because you teach them about your imaginary god. ”

Going back to the analogy of boundaries and fences – with new laws they are telling me what to grow, how to grow it and when they will come in a take it away. All the while I am the one working hard to feed the sheep, protecting the sheep and caring for the sheep.

I am concerned right now that the fence that is unlocked on the side of the property, provides instant access to those who do not have care and concern for those in my care. We as Christians have always presumed that our neighbours will have regard for us and do us no harm.

As a Christian I am often accused of being in the way of progression in society. Society, apparently, needs to move forward with the times and social needs of people. Apparently, I am a backward, bigoted, and  a prude, who is the proverbial wet blanket to everyone’s party. I am forcing my religion on others in society who want to live another way to me. Lately, I have watched as Christians that I know are called “homophobic and bigoted”. These are quiet living people who do not agree with others shouting in their face about their own beliefs.

Now, I get that people don’t believe in my God, Almighty God, Creator of heaven and earth, Saviour, Lord, King of kings. My God, the God of the Bible that I hold so dear. I get that. The latest statistics gathered in 2016, reveal this information –

“The results of the latest national Census today reveal we’re a religiously diverse nation, with Christianity remaining the most common religion (52 per cent of the population).

Islam (2.6 per cent) and Buddhism (2.4 per cent) were the next most common religions reported. Nearly a third of Australians (30 per cent) reported in the Census that they had no religion in 2016.”

Even though Christians make up 52 percent (52.1 percent, actually) of the population I am well aware that we are living in a world that is increasingly hostile towards Christians. A world that not only sees Christians in an unflattering view, but does not want to hear the precious and lifesaving message of the Gospel. I get that. I see that.

A few years ago, I was part of a group of parents that met while our children practiced football twice a week. We would gather around chatting, encouraging our children and in general surviving life as mums and dads. After a few weeks they figured out that I was a Christian, and the usual stuff started – apologising every time they swore. I didn’t say anything, and after a while they figured that, as one lady put it, “she’s alright because she lets us be ourselves.”.

Even if I did complain, I knew that it would just go against me and my faith (been there, done that). I comprehend this and thought nothing more of it. They don’t believe in God and many don’t get who Jesus Christ is to me, in fact, more and more people just believe that Jesus Christ is just a swear word. I get that.

Now, fast forward to this year. On the footy fields while the children were playing, the Referees started to complain about not only the bad language on the field from the players, but the bad language from the spectators and parents on the side lines. So, they put a ban on swearing. The penalty – a warning and then sent off, with the reason for being sent off recorded. Every one decided that they didn’t like it but agreed to comply.

Mmmm… why would they take correction from a football club, but get offended if I request the same?

Right now in Australia they are debating whether the law should be changed to allow same-sex couples to marry. The debate has been marred by lies, violence and intimidation by those wanting a “yes” vote.

On this side of the debate there is an interesting “get out of the way and allow us to move the outdated fences that have been there for centuries.” Or “marriage (another form of a boundary) were used to control people (women) and keep them shackled”, Or “who needs fences, we just need to do what everyone wants and all will be ok” or “what right do you have to stop people who love each other to be married, you are a bigot and you are homophobic.”

Then there is this one – “It is about love”

You see, I don’t think that people should believe in God, just because I say. It is a choice. God gave free will to me, and He gave it to everyone too. You do not have to believe what I do.

Because you don’t want to live like I do, I know that we are going to have some things we don’t agree on. That is your choice. I don’t hate you and I am not trying to force you to believe what I believe.

One of the interesting factors about this whole matter is this: the hypocrisy of those that want these freedoms is that they are willing to take away the freedoms of others while demanding their own.

I hope that I have given you something to think on. While most of my blog readers are Christian, I am sure that this is also being read by many who are not.

Please hear me when I say I am not anti-gay. I am simply concerned with things that are happening within our society that I see as definitely not for the good of all Australians. I am concerned about boundary changes and unlocked gates.

Thank you for reading this blog. Please stay with me as I cover the subject further in the next two blogs.