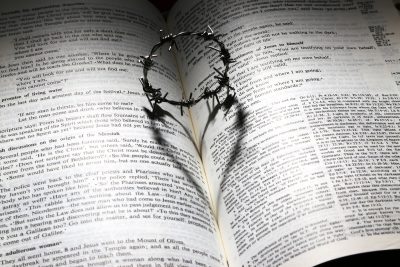 Over the Easter I found plenty of time to ponder what Easter was about and to pray. But the time to put those thoughts onto paper was very limited indeed. Tuesday, after Easter, I sat down to write, but within half an hour received some bad news that left my brain swirling for a few days. Today, I decided that what I started on to write was still needed to be said, but the other reason for this blog became clear.

On Saturday during the Easter period, I took some time to spend time to help my husband do some fencing. The barbed wire was particularly difficult as we restrained it and tied it to the fence post, after we had made room for a gate. I wore some gloves so that the barbed wire I handled would not pierce my hand and rip my skin. I stood looking at the tie after I had finished and checked my arms for cuts.

As I cut off the extra length that was not needed in retying it, I looked at the barbed wire in my hands and I remembered what my Saviour did for me. I let this thought sit for a moment while I went to boil the billy for a cup of tea.

The very fact that barbed wire and thorns do the same job on your skin made a great story line, but I was yet to find out why the barbed wire was necessary for me to notice. A few days later I would know why.

He took it upon Himself

In doing a little research after we arrived home, I found that it could have been one of about 3 or 4 plants that could have been used as the “crown of thorns”. The one most researchers used was the Crown of Thorns (Euphorbia milii). Apparently, it is thorny enough and flexible enough to make into a crown.

It was also interesting that God spoke several times throughout the bible about thorns. In Genesis thorns were a repercussion for disobedience.

“Cursed is the ground because of you; through painful toil you will eat food from it all the days of your life.  It will produce thorns and thistles for you, and you will eat the plants of the field. Gen 5:17b-18 (NIV)

Later, God spoke thru Isaiah because he saw injustice and distress – Isaiah 5:6-7

“I will make it a wasteland, neither pruned nor cultivated, and briers and thorns will grow there. I will command the clouds not to rain on it.”

The vineyard of the Lord Almighty is the nation of Israel, and the people of Judah are the vines he delighted in. And he looked for justice, but saw bloodshed; for righteousness, but heard cries of distress.” (NIV)

In dying on the cross, God’s Son took upon the curses, wrong doing (sin) and disobedience that we ourselves have chosen to walk by. Those things that destroy our lives and our relationship with God. The things that bring guilt and shame, hardship, and pain. A onetime act of God for the sake of all mankind.

This was not only in the cross that He died upon, but the stripes from the whip and the crown of thorns on His head. These things (and much more) were symbolic of a new start and a new promise of God that was completed by the death of His Son for us so that we could have this promise for ourselves – the ability to have the sin, shame and guilt taken from us and a relationship with Almighty God.

This crown was placed upon our Saviour’s head and on that cross He died so that we have through Christ Jesus the freedom from the curse of sin and death. No more guilt and shame.

And you know what the greatest thing about this is – we don’t have to wait for eternity for the work of God to change our lives so that our lives here today are transformed day by day. God want us to have a little bit of heaven on earth, while He walks with us every day.

Our past died on the cross with Christ. The curses that should have been ours was removed as well.

Guilt and shame, hopelessness and despair is something that you do not have to live with. We can be free because of God’s forgiveness and love.

It was the love of God for you that those thorns pierced His head and not ours. God’s offer to us, given in love, to allow us a changed life. The skin of His son broken by thorns so that our thorny broken lives could be changed – now and in eternity.

Over the past few days as my emotions swirled around me in the chaos of the sudden life experiences. I was once again aware that thorny problems have a way of tearing at our emotions and it is our Saviour that we can turn to. There is nothing that He cannot helps us with and that He cannot understand.

The person who I received the bad news about had been like a thorn in my side, yet the need to intercede for the person in prayer was the only thing on my mind. It was like I needed my God more than ever. The fact that my Saviour knew how to forgive his enemies and was the epitome of forgiveness, was my comfort. Yet this person was never my enemy, just someone who regularly brought me to my knees in pray.

I could not pray for this person if I hadn’t forgiven them a long time ago, and remained forgiving every time they pierced me. If bitterness had clouded my heart, I could not have prayed with love. I could not have seen the person in the hospital and felt compassion and concern, if I had hardness.

The need to remind myself that God sees the thorns that pierce me and knows the pain of suffering more than me. I need to leave the thorns to Him. It is up to God to remove the thorns from my life, or to allow them to remain for my growth. This is hard. Especially when the person involved needs mercy when the world says that they need punishment.

I could repeat what I said before, but with a different twist – “It was the love of God for you that those thorns from His captors pierced His head and not ours. God’s offer to us, given in love, to allow us a changed life even while the thorns can pierce us as well. The skin of His Son broken by thorns so that each and every thorny broken life could be changed – now and in eternity.” (italics added)

Christ died not only for the curses of disobedience, but He died for the thorns that come against us in life. I pray that you will give the thorns to Him, He know what to do with them.